Our client is a leading telecommunications and information services provider sitting right at the heart of the global digital transformation. It has over 31,000 employees, an international presence in 15 countries and a $68bn market capitalisation. With a need for considerable internal transformation, the challenge was to build a culture that could thrive in a digital age, whilst holding true to past values that had made them a respected household name. The client had already developed its strategy and now needed to align the organisation behind it. 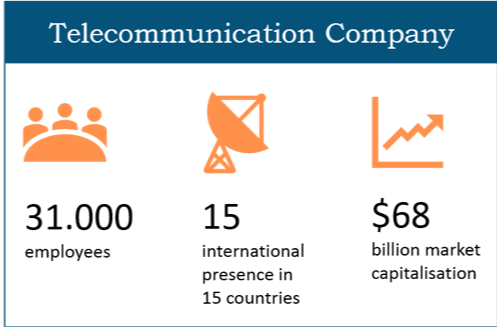 Our CEO, Carolyn Taylor, was appointed as the Executive Team’s coach over a two-year period. After observing the team in a number of scenarios, we concluded they were functioning well, in terms of how they related to each other, but that they were much less aware of the impact they had on the broader organisation. Walking the Talk ran a series of workshops with the Executive Team over an 18-month period, systematically examining their personal behaviour, as well as symbolic decisions and core processes, in order to better align these to the new values of the organisation. We utilised the Human Synergistic Leadership Impact tool, together with 1-on-1 coaching, to support each executive in role modelling the values, as well as mentoring others to do the same.

An assessment of the leadership culture was carried out using our Discover deep dive methodology.

Through the use of this tool, we were able to pinpoint the key changes that needed to occur in order for the telecommunications company to compete successfully in the digital revolution.

The company had already made considerable progress towards becoming a more customer-centric and team-oriented organisation, but there remained a “tangled web of beliefs and behaviour patterns,” which was inhibiting speed and agility. The findings from this assessment prompted and informed a process to build a new set of values for the organisation.

These reflected the essential qualities required to thrive in the future. These, together with a newly crafted purpose, set the scene for the executives’ challenge to become a more values-led organisation. 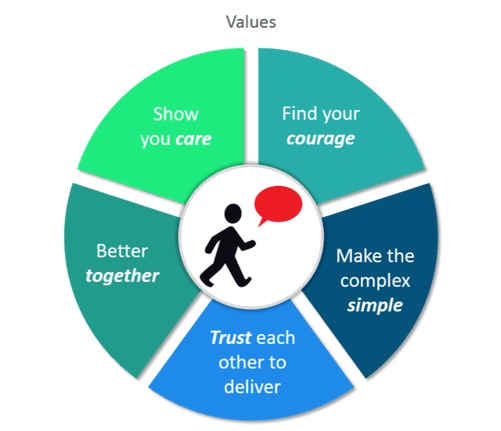 Walking the Talk partnered with a global consulting firm to put in place a process to implement the company’s purpose and values. This 6-month project included: