Our client is one of the world’s leading companies of steel production and employs over 45,000 people globally. A family run business, with over a century in operation, the company responded to market demand in the early 2000s by acquiring a host of global companies and now has a presence in 14 countries.

After the market crash in 2008, the steel giant faced two major challenges. Having an overcapacity of steel, their revenues decreased and profitability dropped. At the same time, China and Russia entered the market with high volume, low-cost model, which forced our Client to rethink their strategy. Their Merger & Acquisition strategy focused on companies who were struggling and others where they could apply their ‘Company process and culture’ effectively.

However, it became apparent that the more traditional, centralised business model that had served them in the past would need to become nimbler in order to survive. Their history of having the perfect process and mindset was no good if they could not react to the market changes required.

Projecting 10 years into the future, the organisation asked itself: Do we have enough talent and empowered local leaders to thrive in the global economy? How can we loosen up our centralised matrix and get back to the dynamic entrepreneurial mindset that made us great? Our client soon realised the solution to these challenges lay in undertaking a culture change process

After hearing recommendations from our previous clients in the region, Walking the Talk was approached because of our reputation of being specialists in the field of culture. As a vast organisation, the client chose to engage three firms to work on different aspects of the change process. It was clear that culture needed to be the driving force. For this reason, it was decided that Walking the Talk would spearhead the project, by aligning the project teams and designing the framework in which they would all operate.

Our work focussed on four streams, some of which were run concurrently:

We conducted a series of interviews and meetings with the Executive Team in order to understand those factors they would absolutely have to get right in order to execute on their strategy. Any work on culture would need to be in support of these business imperatives.

By defining their business imperatives, they felt confident they would be able to maintain the best of their original culture by making each market be accountable for defining their own business model. This process heralded the beginning of a new culture of decentralised decision-making, as well as engaging the Senior Leadership around the need for change. 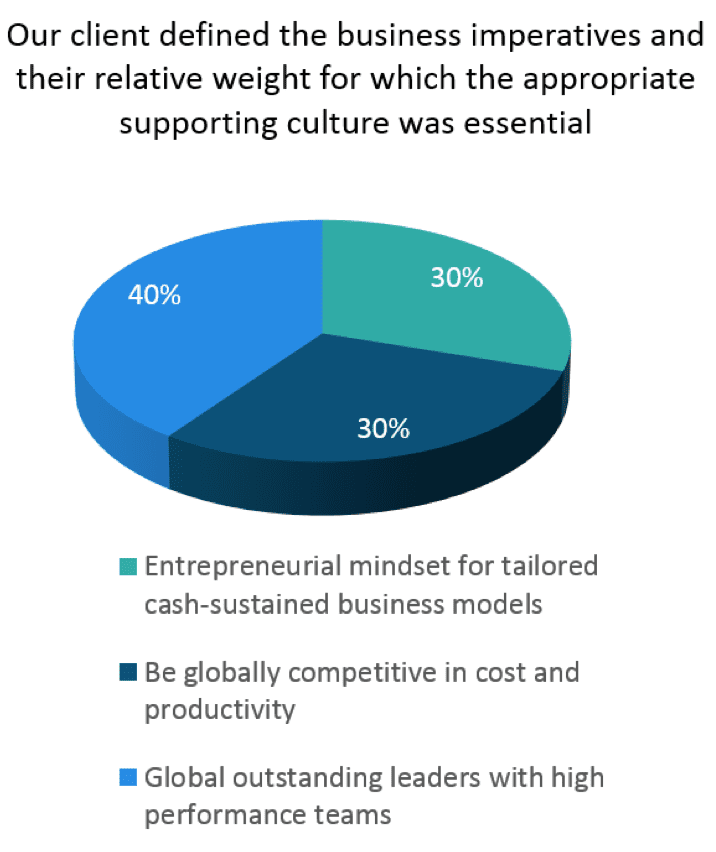 The Leadership Team embarked on a process to define the target culture required, and the extent that this would be consistent across different across the group. What should be core? And where would variation be useful?

Using our proprietary online voting system, Walking the Talk’s Target Culture Process was run with the Executive Leadership Team, as well as the leadership teams of each of the organisation’s five different business operations.

This process achieved alignment within the teams and gave rise to deep discussions identifying the key behaviours required to serve the target culture. 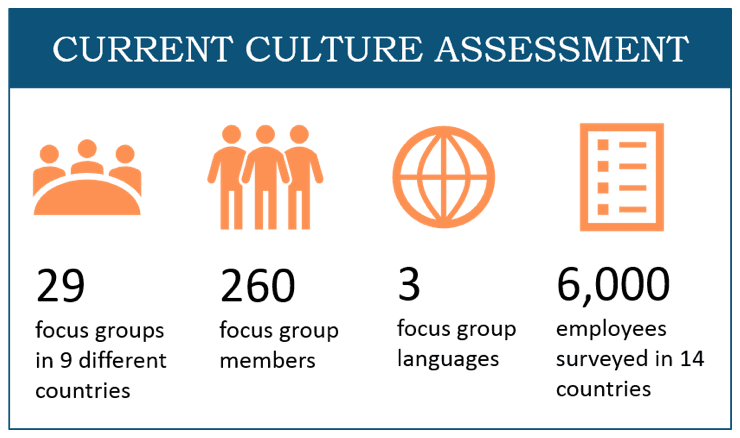 The Culture Assessment provided a clear understanding of what was required to support its 2022 Vision and Goals.

Current Culture Assessment revealed a strong culture with some solid traits that spread across the entire organisation: A culture of safety, respect, engagement and pride.

There was potential within the results to increase the organisation’s level of openness, as well the willingness to innovate, traits that would help them attract the best new talent.

Finding a less process-heavy and centralised approach would also enable them to be more nimble on the global stage.

Our assessment gave a clear picture of where the organisation should begin, providing a detailed report for the global entity and for each business unit. The report identified the drivers of the current culture, the underlying beliefs that may need to be adjusted, as well as recommendations for the priority areas of investment over the next time period.

One such recommendation was the alignment of internal and external project teams involved. All groups were critical to the success of the overall project and would benefit from having a common language to work with as they supported each other’s success.

We conducted a workshop with the core team, which included individuals from the three teams that were working with all consulting firms and key employees. The teams were based in various geographic locations and spoke multiple languages. Through this process, we were able to focus the group in a unified direction, integrating the Culture Plan, as well as the levers required to shift the existing culture.

A global culture planning team was selected internally. The team underwent our culture planning process to deliver a plan with high business unit ownership and was fully supported by the Executive Team. The plan integrated streams of work on structure, leadership development, communication, project management and meritocracy, as well as work with the Executive Team to ensure their ability to lead and role model the culture change required. The plan is now in early stages of implementation.