Maintaining traditions & ethics during a merger

BBA was a family-owned investment and corporate Brazilian bank acquired by Itaú, the largest Brazilian bank, to form Itaú BBA. The bank had an excellent reputation for customer service, for playing the long game, for its impeccable values, and for its deep knowledge of local conditions.

In addition to all of the risks associated by such an acquisition, the bank faced the arrival of many global competitors into their market, and the risk of losing some of their best talent.

Itaú BBA had won many mandates because of its values, its family orientation, and its agility. In short, the identity of the bank, which had given customers the confidence to choose them again and again, was at risk.

The executive team realised that whilst in the past their leadership of culture had been instinctive, in the future they needed to put in place a more structured approach. This would ensure that they would be able to sustain what was great about their culture, whilst adapting to rapid growth and new ownership.

Itau needed to put in place a more structured approach which would ensure that they would be able to sustain what was great about their culture.

Candido Bracher, the President of Itaú BBA, brought Walking the Talk in to work with his executive team to build a culture and identity for Itaú BBA which would allow it to:

The program started with a deep dive culture assessment, which enabled us to identify the elements of the culture, which elements contained risk, and the levers that must be pulled to support the new vision.

Walking the Talk’s Discover diagnostic process provided key insights as to how patterns of behaviour were being encouraged that were not employee focused. Deep insights into behaviours, symbols and systems sustaining the current culture allowed the Executive Team to pinpoint how they needed to change their approach, and identify the initiatives that would have the most impact.

The program was strongly supported by the Executive Team, through a heavy investment in their own development to lead a customer-centric culture. Most of the team had been in the organisation for some time and recognised that they themselves would need to change in order to successfully lead the integration into the larger Itaú. Initially the Executive Team committed to a team development process, individual assessment process and coaching.

Walking the Talk’s Methodology helped produce a plan which gave longevity. The organisation’s project management strength put them in a strong position to set the Culture Program up in a manner that would increase its momentum. A program team was established from the start and a comprehensive program plan developed.

All leaders in Itaú BBA went through an intensive leadership development program which challenged their attitudes towards their work, their colleagues, their parent company, and helped them become more conscious and able to lead the type of organisation required for the future.

Key behaviours were included in the performance review process for the first time, and leaders were ranked according to both their financial performance and their behaviour, with bonuses paid out accordingly.

“The values and beliefs of the institution that made Itaú BBA had to be preserved, but how they were reflected in the dayto-day attitudes of our professionals needed to evolve. The process we went through was difficult, but extremely rewarding and we have strengthened the culture we need for the future.”
Candido Bracher, President Itaú BBA

Itaú BBA has grown from 500 employees to several thousand over a 10 year period. They now contribute up to 40% of the total profits of Itaú-Unibanco. The trust placed in the team by Itaú President Roberto Setuba has resulted in them now leading large additional pieces of the organisation, such as Treasury, Wealth Management and mid-size accounts.

They have maintained their reputation for customer-centricity in the market and their values are strong. They were less affected than others by the global financial crisis because of their prudent and customer centric investment decisions. Itaú-Unibanco emerged from the financial crisis as the 11th largest bank in the world.

The team successfully managed the merger between Itaú and Unibanco and the smaller acquisition of Bank Boston. In both cases, people were treated with respect, values were protected and the customers remained happy. 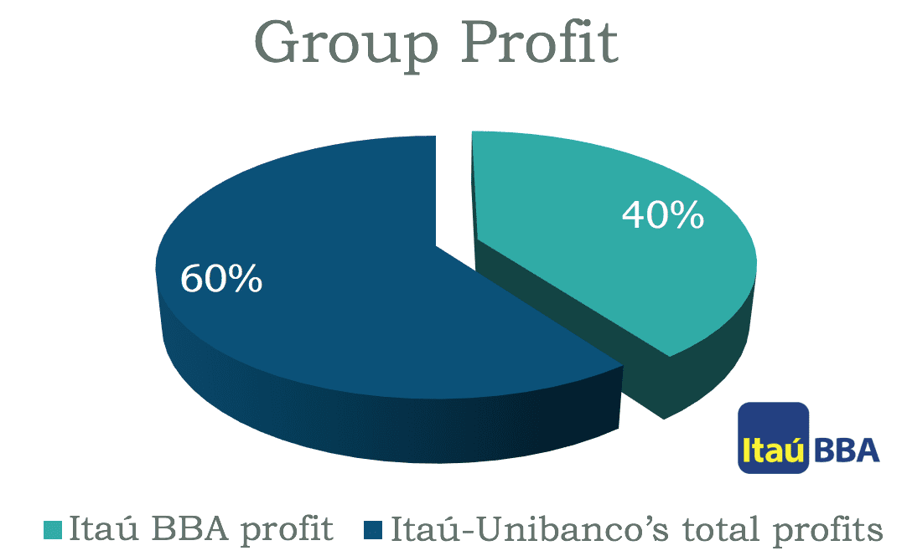