Airservices is a government-owned organisation providing services to the aviation industry. It manages air traffic operations for over 90 million passengers on more than 4 million flights every year, covering 11 percent of the world’s airspace. Services include: the provision of aeronautical data, telecommunications, navigation services and aviation rescue firefighting services. The company employs more than 4,000 staff, with approximately 1,000 air traffic controllers working from two major centres in Melbourne and Brisbane, as well as 29 towers at international and regional airports.

Airservices was facing an unusually large number of challenges when it approached Walking the Talk. Including a 60% increase of air traffic movements by 2030, a large capital infrastructure program, increasing environmental concerns, the development and implementation of a world-first navigation system, and an ageing workforce.

The organisation realised that it needed to do things differently in order to successfully meet those challenges, as the existing culture was either slowing down the change process or making it very hard. A broad culture transformation process was necessary.

The culture program we implemented for Airservices included the following three streams of work, which took place simultaneously:

To establish a baseline of data and design a program addressing the organisation’s most needed cultural shifts, we conducted the following activities:

It was crucial to align the Executive Team and the Senior Leaders with the culture work undertaken by the organisation. We found that a combination of education and intact-team worked best in this context.

We worked closely with key people in the organisation to influence the culture from within and design a program for the whole business.

As the culture of Airservices started to shift, the staff and stakeholders experienced the following main changes: 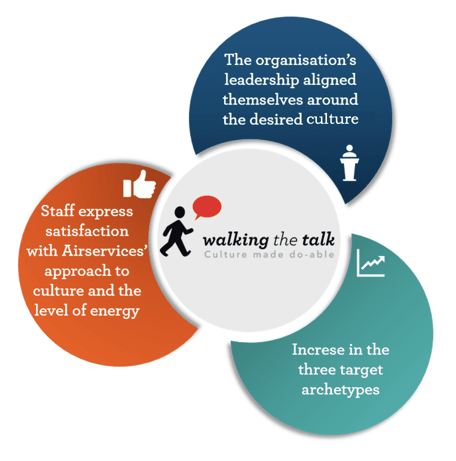 “The Walking the Talk team have in every way shared our journey. They provided a frame in which to assess, plan and change our culture. They expertly guided and consistently provided support to enable Airservices to lead our own transformation."

"While change, particular on an organisational scale, is an inevitably long and arduous journey, the Walking the Talk team have enabled us to shift and create momentum towards the type of organisation we need to be to meet our challenges. While the theory of managing, leading and influencing culture is readily grasped by most, the actual 'doing' is the hard thing and that's where Walking the Talk have provided a framework and support to allow us to put work on culture into action.”
Craig Oakley, Implementation Lead, Our People - Our Future. Airservices Culture Program